Is there an easy way to delete all of the generated files? Print

CAUTION!
This article shows how to use the Clean Generated command, which removes all files from the configured output folder, and all of its subfolders.  This normally should include only generated files.  But if you have manually edited or added files any of the output folders, those files will also be deleted.

When you run code generation in RepreZen API Studio, any files in the configured output folder will be overwritten by newly generated files of the same name.  But in some cases old files will remain.  For example, if you removed or renamed a path item in your source RAPID-ML or Swagger-OpenAPI specification, a generated file for the old path item may remain in the generated output folder.

You can remove these generated files using the Clean Generated command in the context menu: 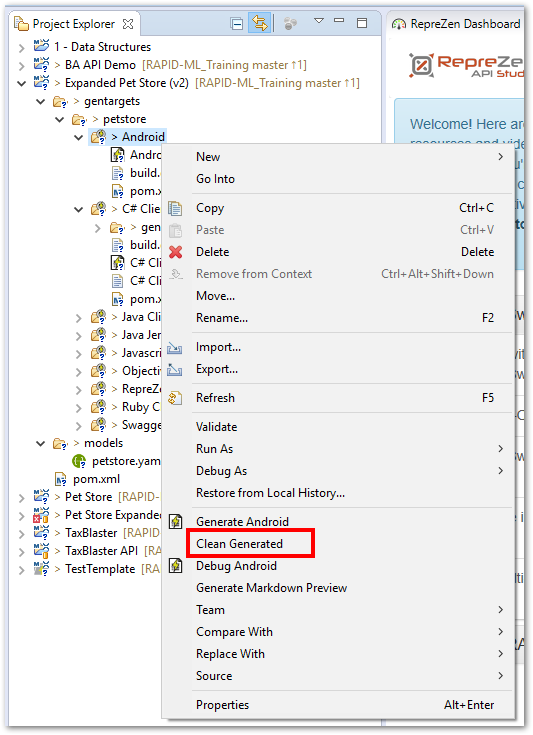 The Clean Generated command operates on a GenTarget folder, or a parent folder containing one or more GenTargets.  It will delete the configured output directory directory, and all of its contents, for each GenTarget within the selected scope.

By default, GenTargets are configured to write generated output into a subfolder named 'generated' under the GenTarget folder.  You con override this default by specifying a different value for the relativeOutputDir in the .gen configuration file:

Clean Generated will remove the configured folder specified in each of the in-scope GenTargets.

We recommend the following precautions: