The Swagger–OpenAPI 2.0 specification allows you to specify data types and structures for your API contract, using Schema Objects, and similar constructs that appear in Parameters and Headers.

Schema Objects in particular provide the models for request and response message payloads:

However, Swagger's core libraries deviate from the specification in subtle ways that can cause unexpected behavior.  RepreZen API Studio mitigates these issues and provides workarounds wherever practical.  But the core libraries are used throughout the Swagger tools ecosystem, so some limitations remain.

JSON Schema allows you to specify an additionalProperties value of true, which just makes the default behavior explicit, or false, which means that only explicitly specified properties are allowed. 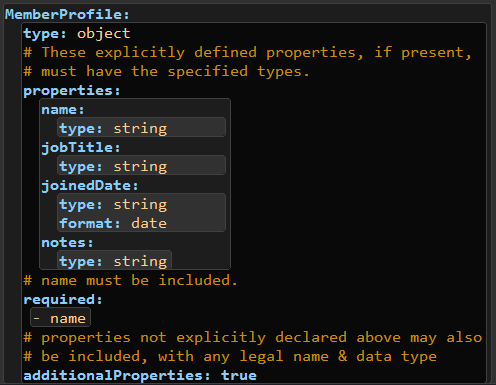 While the Swagger 2.0 specification doesn't say anything to contradict this, the implementation libraries ignore boolean true and false values. They have no effect on documentation and generated code produced from your Swagger specification. Some comments suggest that the default behavior in Swagger should be to disallow additional properties, but this is not in the Swagger 2.0 spec.

Limitations on Schemas with Both properties and additionalProperties

Aside from boolean true and false values, JSON Schema also allows additionalProperties to specify a schema as its value. In this case, additional properties are allowed, as long as their values conform to the specified schema. This "schema form" is the only form supported by Swagger.

The limitations are specific to the context in which the Schema is defined. Combination schemas work properly in the following contexts:

Combination schemas are not supported in these other contexts:

Schemas in these unsupported contexts will ignore properties or additionalProperties if they are both defined in the schema. 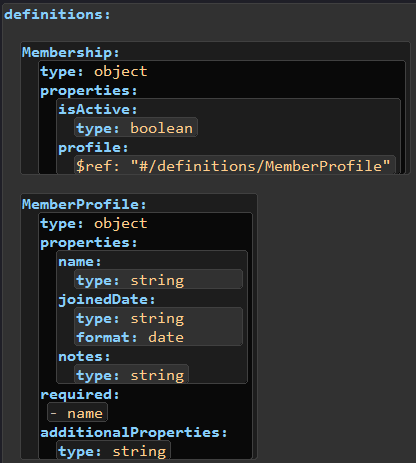 The cause of these issues is deeply rooted in the design of the Swagger-Models library.  As background info for developers who may be interested: